Last month we decided it was finally time to put up a real back-splash in our kitchen.  When we moved into our new house the back splash was just a painted wall.  Then last year I had painted it with chalkboard paint which was pretty fun for awhile, but grease splatters from cooking and chalkboard paint don't exactly go together very well!  So, it was time to figure out what to put up as a real back-splash.  We spent a few weekends looking at every type of stone, tile, marble, etc... and in the end we chose a simple antique white ceramic subway tile.  It's classic, it's neutral and goes with everything.  Plus it wasn't too expensive which I liked! 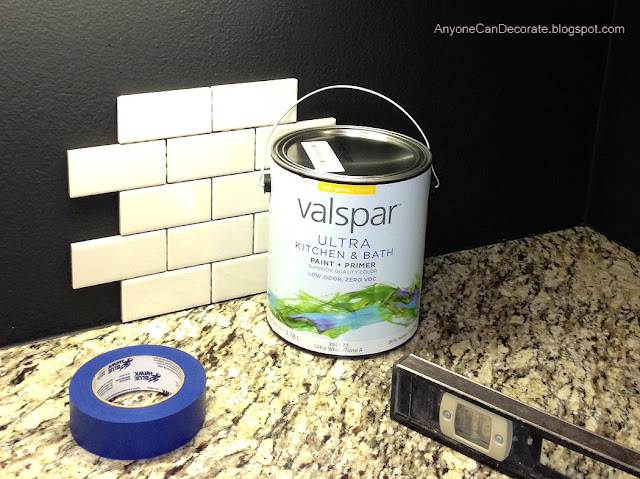 We had watched a DIY video on how to lay a tile backsplash and were comfortable with it.  So I planned to have all of the needed materials in advance of the weekend... hoping we could complete the entire job in one weekend.  I had plenty of tile, thin set (the gunk that holds the tile to the wall), a tile trowel, a rubber float, a 5 gallon bucket, a mixing paddle, tape, plastic to protect the counters... etc....  We were fully prepared.

We had bought this handy dandy tile cutter that we had seen at a swap meet last year that was supposed to be awesome!  The guy at the swap meet was like an infomercial showing us how easy it was to use the contraption.   And he made it look super easy!  With that little contraption cutting tile was going to be a breeze.  (INSERT Murphy's Law HERE)... Anything that can go wrong will... And if it looks to good to be true, it probably IS!!!

Saturday morning all excited and ready to tile we decided we better cut a tile to see how it looks.  UHG!  What the heck.... it looked horrible.  We followed the directions, did it just like the guy showed us.  Needless to say, the thing was a piece of CRAP (excuse my language) but i can't think of a better word!

We would not be defeated, this was just a temporary set-back.  I looked online at both Lowe's and the Home Depot to see what kind of tile cutters they sold in store.  We didn't want to spend a few hundred dollars on a fancy wet saw, we simply wanted something that would cut a straight line clean.  Okay, so Home Depot had a non electric sort of like vice that held the tile where you would score the tile and then snap it.  It was about $30 and the box directions made it look easy enough so we bought it.  We took the saw home and cut one tile....  AHHH, no.  The tile was ugly, chipped and looked horrible.

Time for a break... we got some lunch and now our morning job wouldn't start until afternoon.

After lunch it was back to the store.  Now it was time to get serious.  We needed to buy something electric, something that would actually cut the tile, not just score it.  So we returned the "mistake" purchase and wanted to buy something a bit more industrial... Yay, power tools!  Nothing at the first store in our budget.

So off to another store where I found a small (personal size for small projects) electric wet saw.  It was slightly larger than my laptop and a bit thicker.  It held a little water and it said it would cut tiles up to 12".  It was under $100 and came with the cutting blade.  Finally this should do it.  Since we were only using small subway tile, this would work... or at least it should work.  Right???

We live in a somewhat rural area so going to the home improvement store is a 16 mile round trip... and having to go to the competitors store is about a 40 mile round trip in the opposite direction.  So by the time we found the saw, our day was pretty much shot.  We decided to hang it up for the day.  The next day (Sunday) we would start again in the morning.  Okay, so our tile job might take two weekends, but we could deal with that!  Since my hubby works all week, weekends are the only time for this kind of job.

I'd like to say that this is where the story ends and that we lived happily ever after.... But, unfortunately I can't.  Because Saturday night something was bugging me about the little wet saw we had just purchased.  It just didn't "feel right".  I guess you could call it intuition, but I just knew this was not the way to go.  I decided I better look online for reviews on the little saw.  And guess what???  Yep, the reviews were horrendous!   Although the saw might cut a few tiles, it will rust as soon as you use it.  Imagine that, a wet saw that rusts.  Not only will the cutting blade rust immediately, but also the saw tables metal surface rusts on day one of use.   So for $100 you have purchased a throw away tool.

Our kitchen back-splash has 8 electrical outlets and one phone jack in the backsplash area.  All of which need to have the tile cut around them.  At this point I had no idea how many days of cutting work this would take, but I knew I was not going to keep a saw that would rust.

Okay, so maybe we could rent a tile saw for a day, but at this rate and most likely we would need it for several days and that gets pretty expensive.  So buying one was still our desire.

On Sunday morning we decided to bite the bullet and go buy a proper wet saw.  The place we decided to buy it was a 50 mile round trip.  We purchased the wet saw, the cutting blade and a two year warranty (just in case).  This thing is going to last us one way or another!!!

With breakfast in route combined with our time at the store and then returning home, it was after noon by the time we got home.  Yay, we got a real tile saw... like the pros use.  Some assembly required.  That's okay, we can do this.  I joked that it would be 4:00 before we could cut tile (I was joking, I swear!).

But, here comes Murphy again!!!  Tile saw set up, turn it on, loud POP...  NO... Seriously, what just happened???  We open up where the blade is attached and the piece that holds the blade in place was broke in half.  I thought my husband was joking... then he showed me.  It was broken!  Okay, I finally lost it and started crying!!!  After all, a girl can only take so much...

My husband was still cool as a cucumber.  He noticed that the hole size in the center of the blade was too large for the mount that it sat on.  This is what caused the break to happen.  He suggested we go back to the place we bought the saw (another 50 mile round trip) and take the broken piece and the blade that they sold us.  Tell them what happened and ask them to open another saw and give us a new piece to replace the broken piece... and also give us the correct size saw blade.

I wanted to tile and I wanted it done in one weekend.  And that was so not happening!!!

I finally stopped having a pitty party hopped into the car and off we went for what felt like the millionth time... to get a saw that worked.  I know that's a bit of an exaggeration, but seriously this was getting ridiculous!!!

The good news is that the store fixed our problem, they gave us the piece we needed off of another saw, also gave us the proper blade and apologized.  All was well... And it was going to work this time.  It had to...

It was just before 4:00 p.m. on Sunday afternoon that we finally cut our first tile. 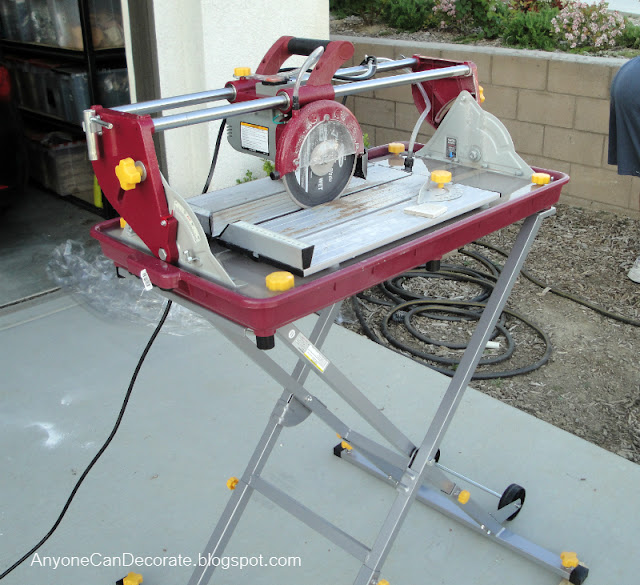 Here is a sneak peek at our tile... The first wall is done... and so far so good.  We have only just begun!  I pray that Murphy and his Law will stay away for the rest of this project...  We only have weekends to work on it, so hopefully before long, I will be able to share our completed back splash with you :) 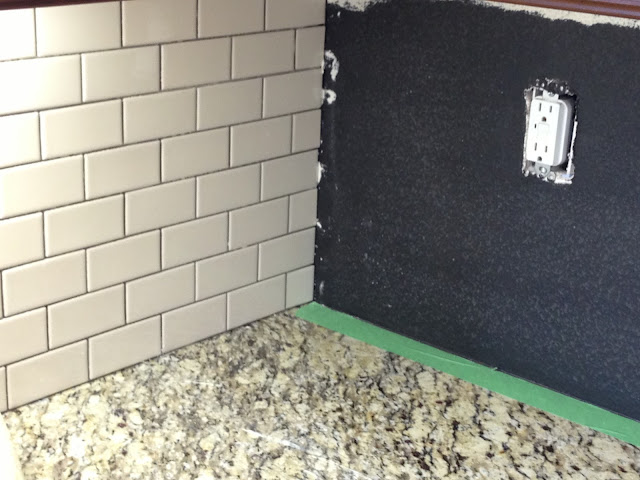 Until next time,
Happy decorating!