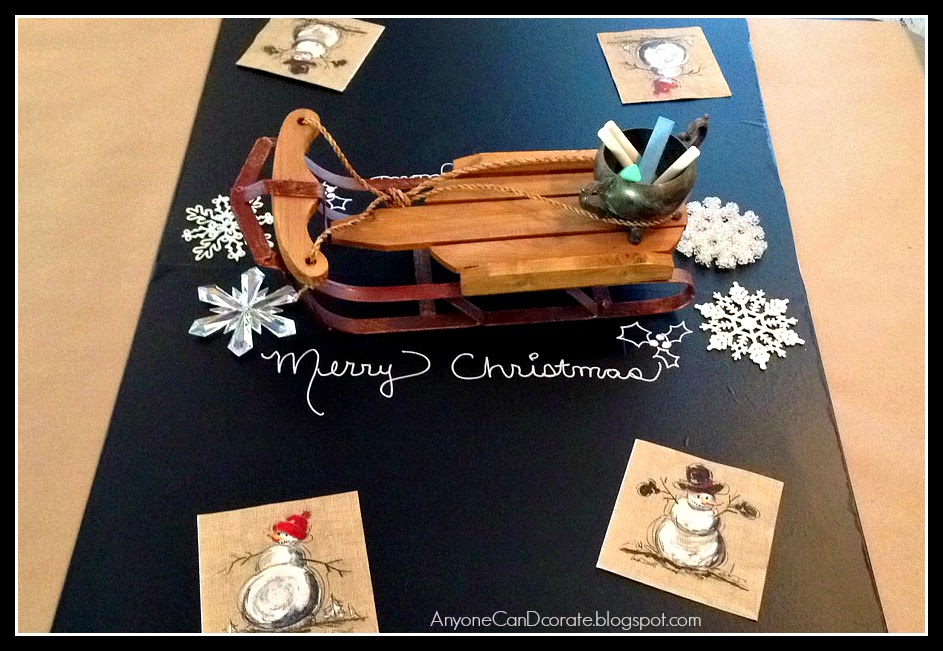 Yesterday I decided I wanted to do something fun for the kids at their Christmas Table. I had some vinyl chalkboard contact paper and a large thin piece of fiberboard (smooth finish). I first covered the kids table with brown butcher wrapping paper, Then I covered the thin fiber board with the self adhesive chalkboard paper. I put a cute few snowflake ornaments and a little sled in the center with a container of chalk on top. I added a few snowman napkins for drawing inspiration... and there you have it. A fun interactive place for the kiddos or the adults to get creative if they want. Even if nobody decides to draw on it, I love how it turned out!!!

I hope you all have a wonderful and blessed Christmas!

We are currently living back and forth between two different homes. I have done some Christmas decorating at each place.. but with so much traveling and packing to go back and forth I've been horrible at photographing and sharing this years decorations.

Today I am re-sharing one of my vintage posts of these DIY Christmas Trees made from Antique Postcards... I put these up each year since I've made them. 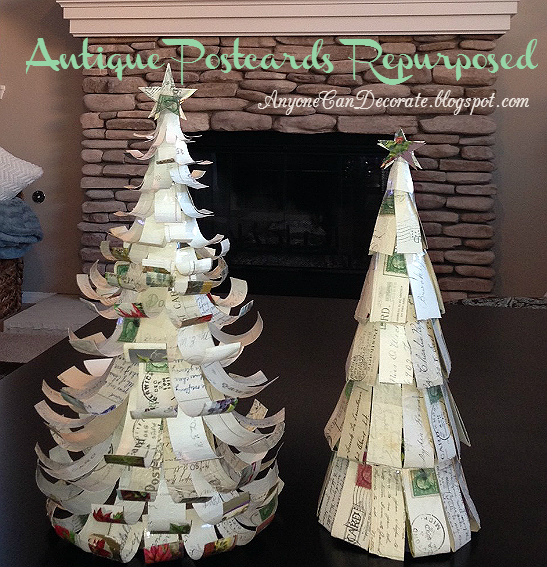 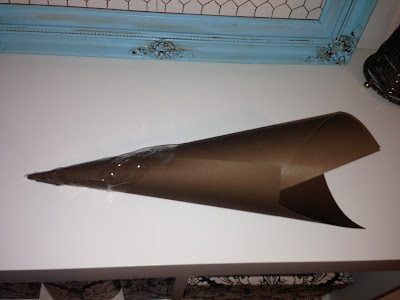 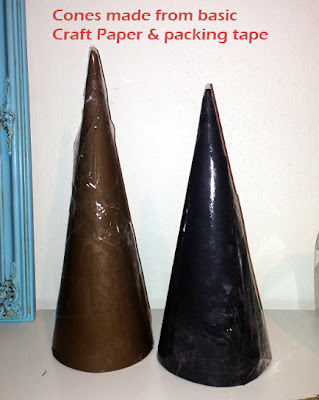 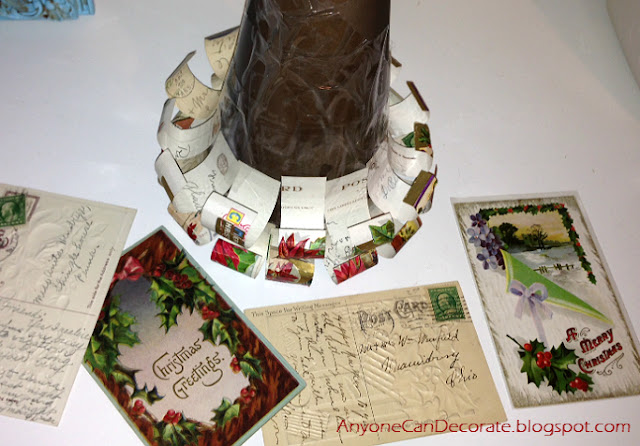 After they were curled I started from the bottom up, one row at a time...  I used packaging tape to tape each piece to the cone. Below is the first tree as I finished it.  Notice how you can see the stamps and postal marks.  There are dates from as early as 1905 to about 1915 on this tree.  All of the stamps were one cent back then. 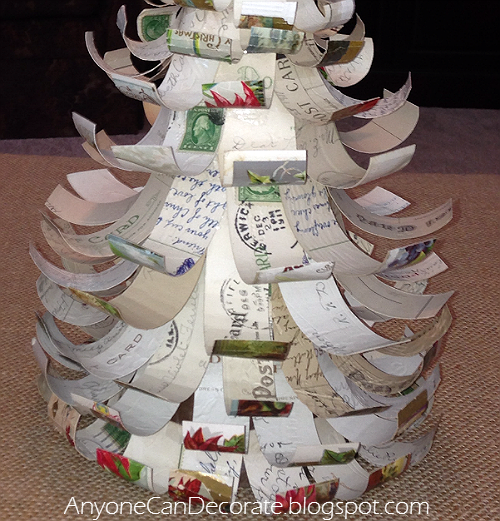 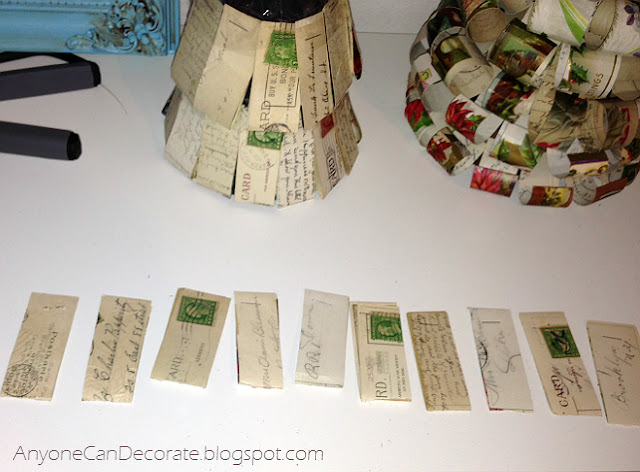 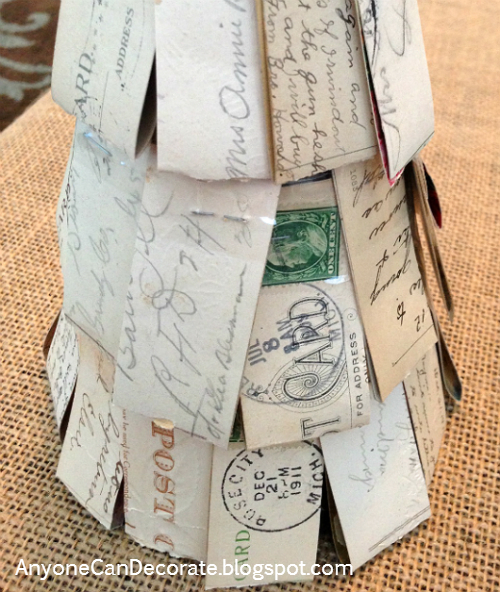 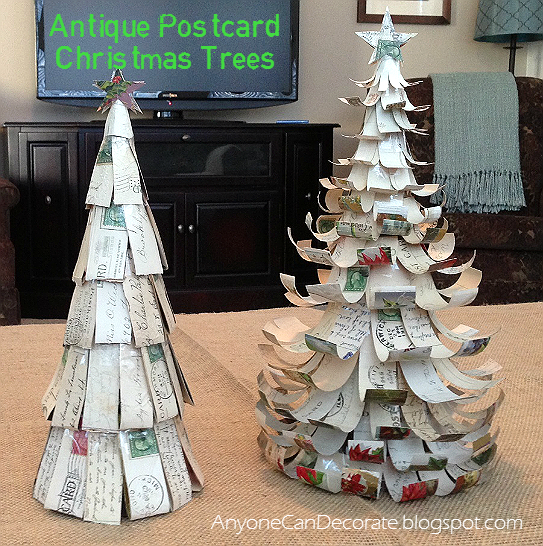 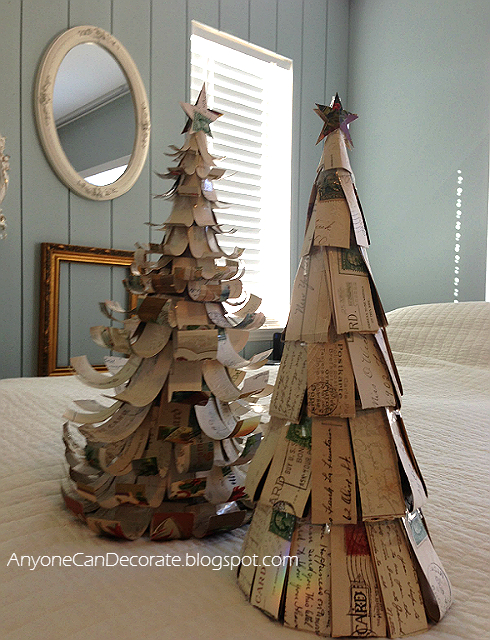 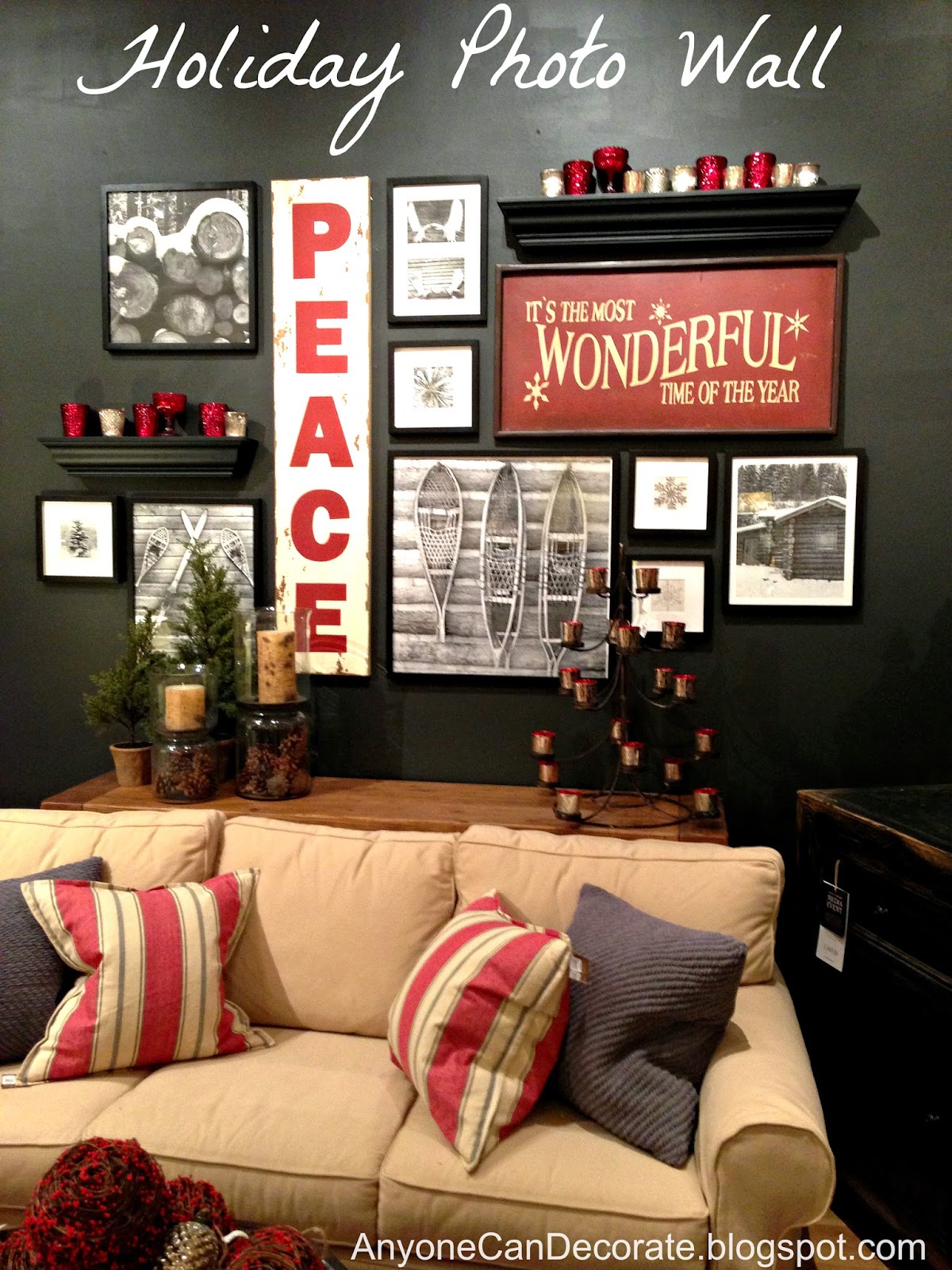 How gorgeous is this Winter inspired Holiday photo wall. I love the contrast of the dark grey chalkboard like wall with the black and white photos and the pops of red! I wish I could take credit for it, but I found this beauty during a visit to Pottery Barn. It's so inspiring that I couldn't help but snap a few photos to share. 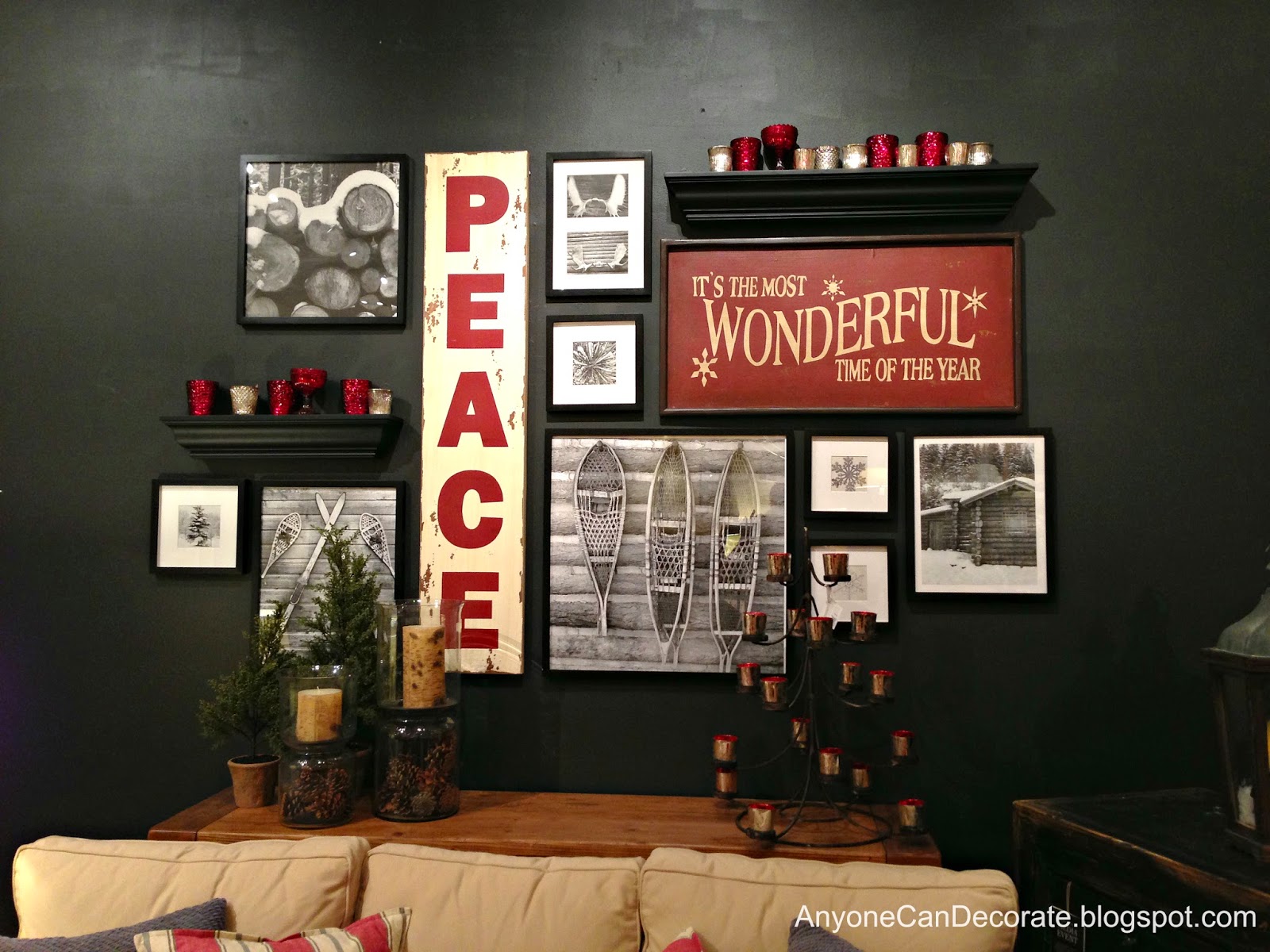 The Vintage Marketplace at the Oaks in Rainbow (Fallbrook, California) is being held this coming weekend... It will be from Friday, December 5th though Sunday, December 7th. See the flyer below for the address and full details.

There will be 60+ vendors selling vintage home and garden finds, re-purposed items, jewelry, art, clothing and more... I'm looking forward to seeing lots of pretties and getting some Christmas shopping done. Hope to see you there! 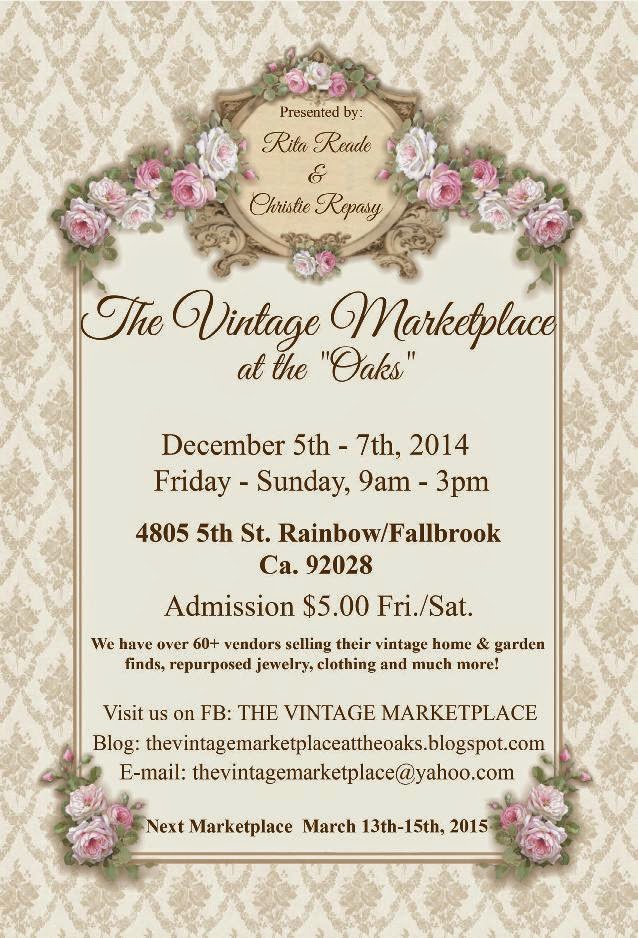