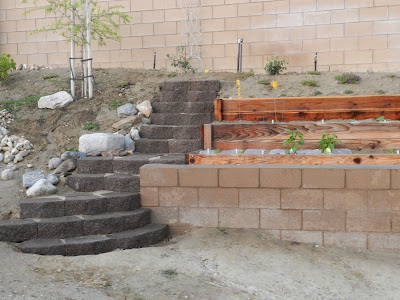 We have added a second level to our raised vegetable garden.  We have also put in stairs along the side.. and most of our veggies are now planted and happily growing... Some I grew from seeds and others we purchased and planted from our local nursery.

Last year a gopher completely demolished our vegetables (the little stinker ate pretty much all of them, row by row they all disappeared).  So this year we not only added a second level to our garden, but we (my hubby while I supervised... lol) completely dug out the first level of the raised garden and installed a wire mesh fully across the bottom to keep the gophers out.  I hope it works!  I can't wait to have my own fresh organic veggies :) 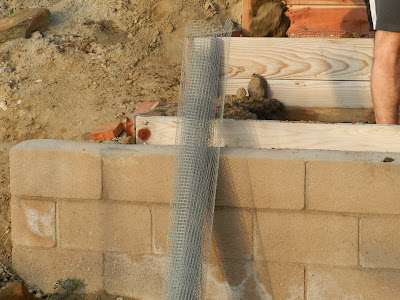 This is a picture of the wire mesh as he was installing it. 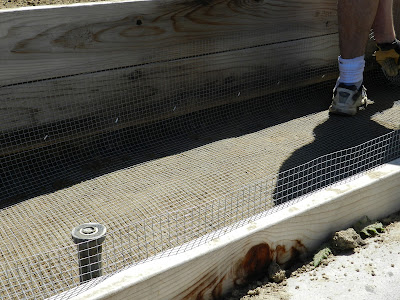 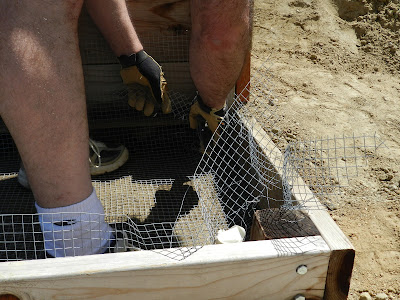 My poor husband spent days shoveling and digging out dirt, sifting all of the dirt, then mixing it with good planting soil and mulch and then reloading the planters with all of the good stuff. 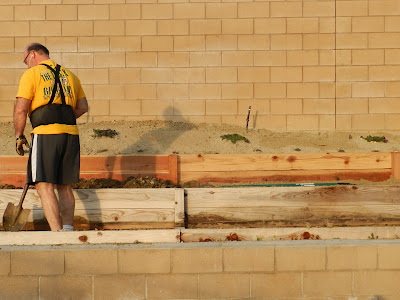 I planted cucumbers, tomatoes, cilantro and green onions from organic seeds and grew them in my kitchen window while the planters were being built. 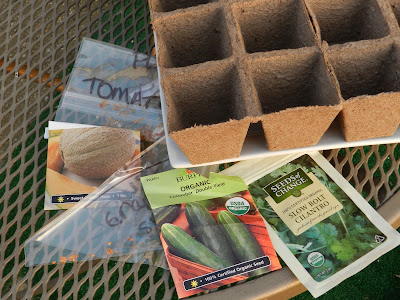 Below are my seedlings as they started growing.  Eventually they all came up.  And they have now been planted into the garden. 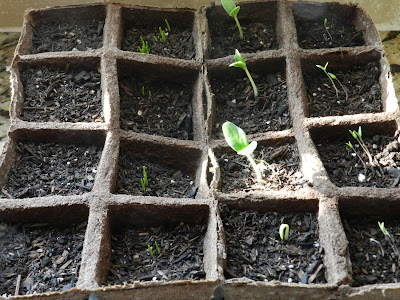 Here is the garden area before the steps were started. 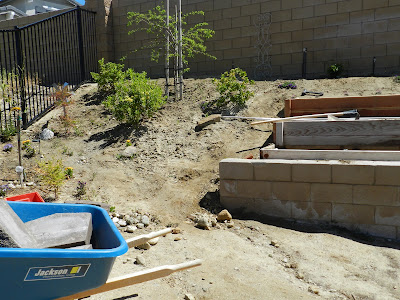 We planted Verbena and a few other plants along the top ridge and on the hill. 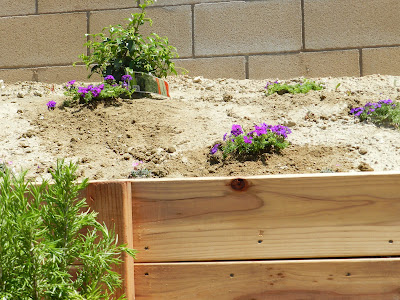 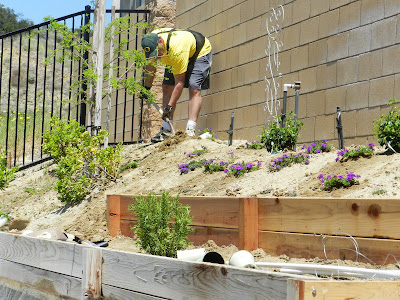 Below shows the first two steps as they were installed. 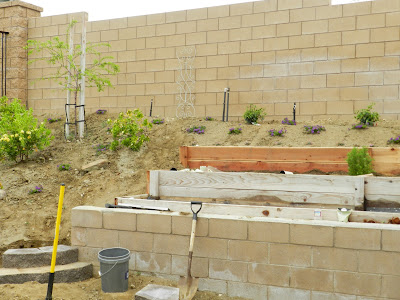 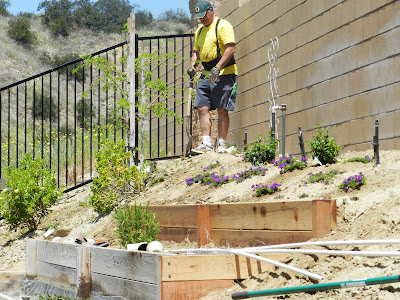 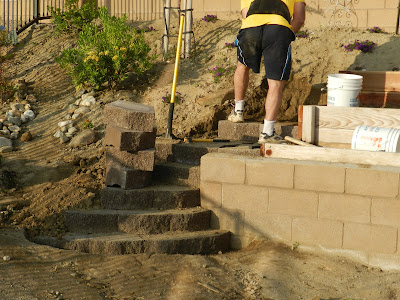 I have added some rocks down the side.  It is not done yet, but eventually it will look like a dry riverbed, stream, waterfall coming down the hill. 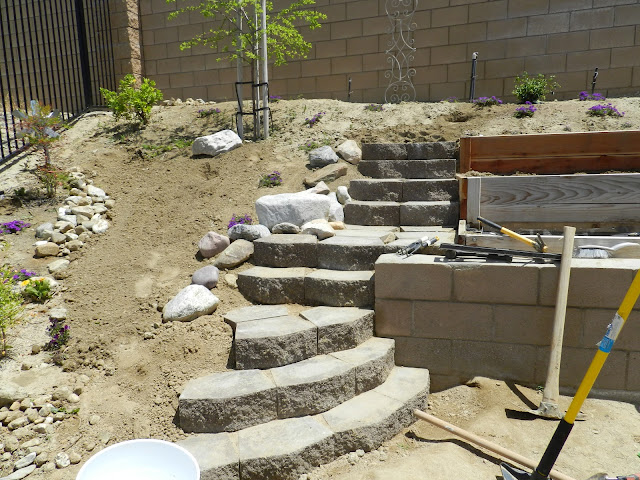 The steps now go almost to the top.  At the top we have planted a blueberry bush/vine.  Eventually I would like to get a large trellis on the block wall that they can grow on.


The garden is now 70% planted.  We have tomatoes, cucumbers, bell peppers, strawberries, zucchini, rosemary, basil, cilantro,  pumpkin and watermelon.  In the past I've only managed to grow tomatoes and rosemary, so I am hoping that this year I can actually grow all of these.  We have also planted four fruit trees; plum, nectarine, tangelo and avocado. 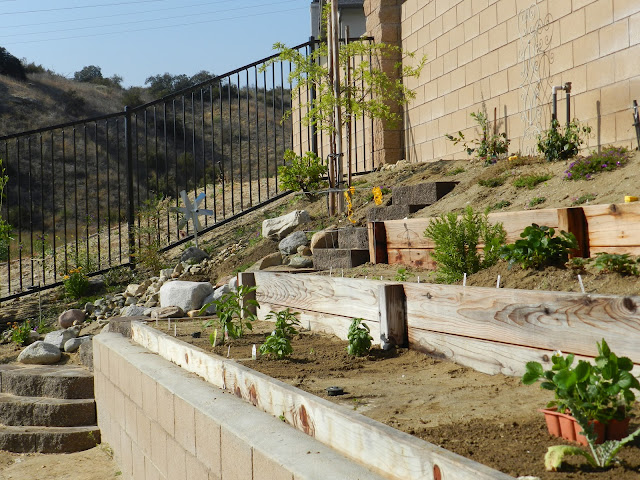 We are currently putting up a two foot bunny fence along the rear wrought iron fence in an attempt to keep unwanted critters out of our yard.  Also, I have ordered bird netting to put up over the veggies.  We will put it up as soon as it gets here, hopefully before any animals come destroy our hard work!


We've been gradually planting things across the rear of the yard... but the rest of the yard is still dirt.  Except a 6' x 8' piece of astroturf where the barbecue sits.  Eventually we will do a large patio in pavers.  Since my husband is doing all of the work on weekends or at night, it will still be a long time before we have a complete backyard.  It is fun watching the progress as we make it! 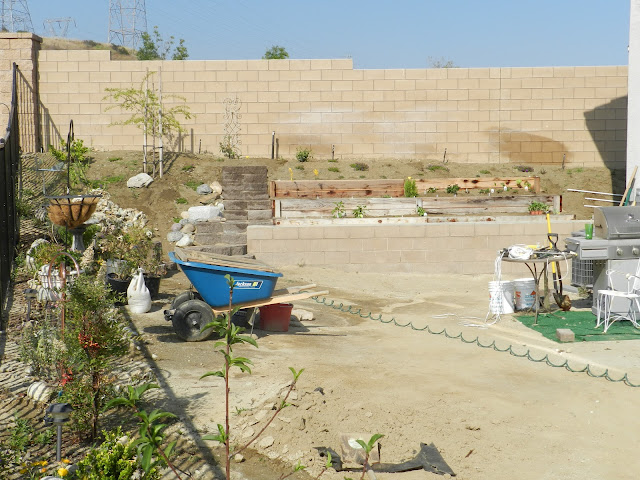 Until next time...
Happy decorating!