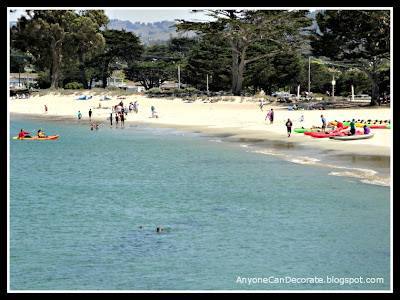 Having never been to Monterey, California before we didn't know what to expect when we arrived.  The first place we stopped was the Fisherman's Wharf.  We decided to walk down the wharf (pier) just to see what it was about. Fisherman's Wharf is just that.  Where the fishing boats come in and out and where a couple of fish companies sell their fresh fish and seafood (wholesale and to the public). 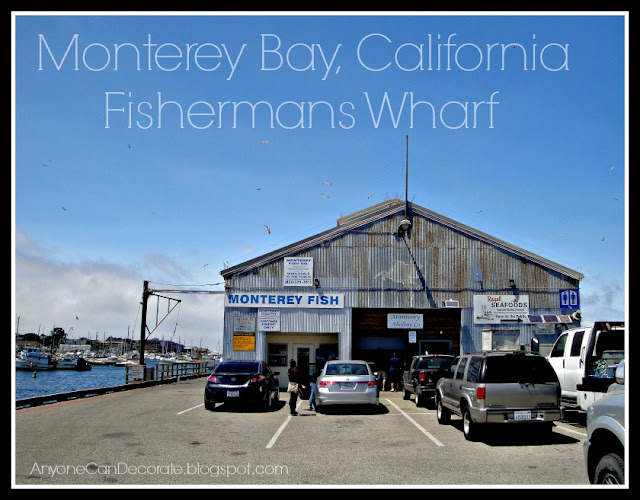 I love sushi, but don't necessarily like seeing the fish with their heads still on! 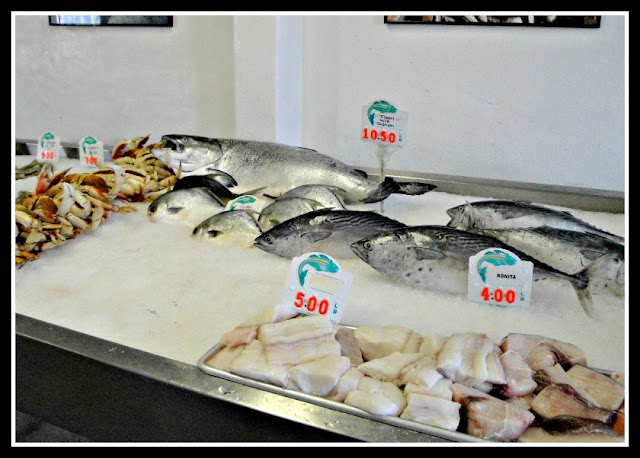 I knew that the Monterey Bay is known for being one of the most active areas for sea-life on the California coast.  After first seeing tons of sea lions at Santa Cruz, I was hopeful that we would see more sea life in Monterey too. While we were walking down the wharf pier we saw a few sea otters playing around.  One in particular was very close to us... He kept swimming under the pier to get muscles and then he would swim out into the open, flip to his back, then crack them open and eat them.  It was such a neat experience to watch him doing his thing and he didn't seem to care that we along with many other tourists watched on (snapped photos, videos and such). 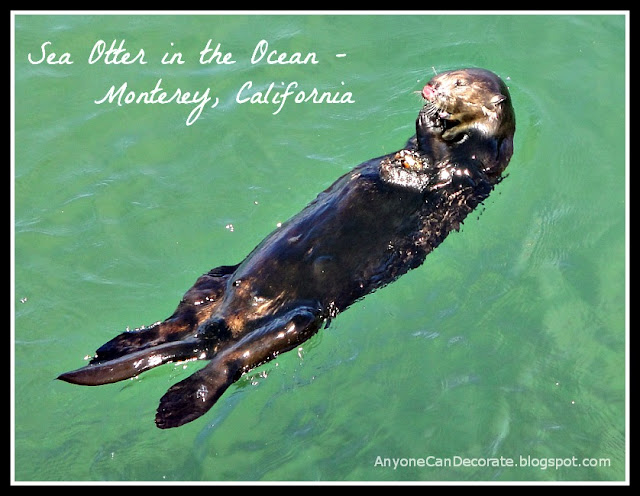 After fishermans wharf we decided to drive around and see what else we could find.  I was happy we came across Cannery Row. This was obviously the happening area of Monterey.  Tons of cute shops, restaurants and touristy places to see and at the end was the famous Monterey Bay Aquarium. 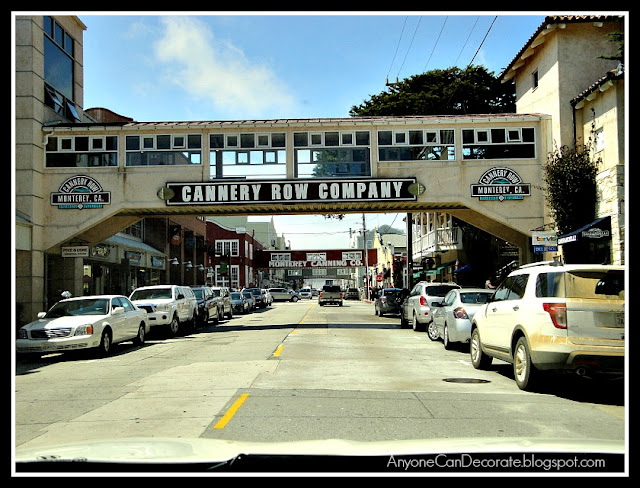 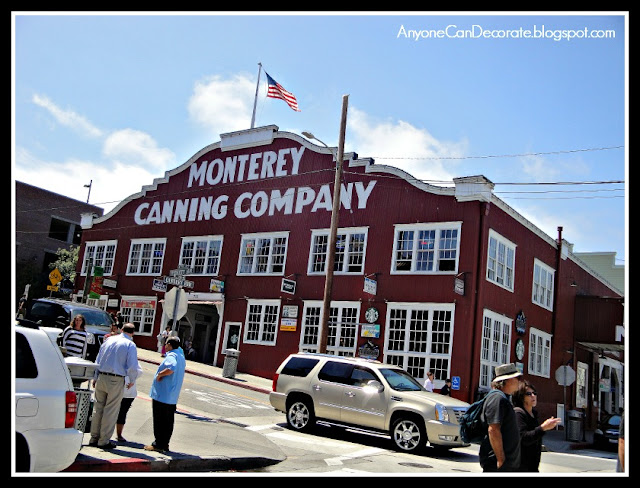 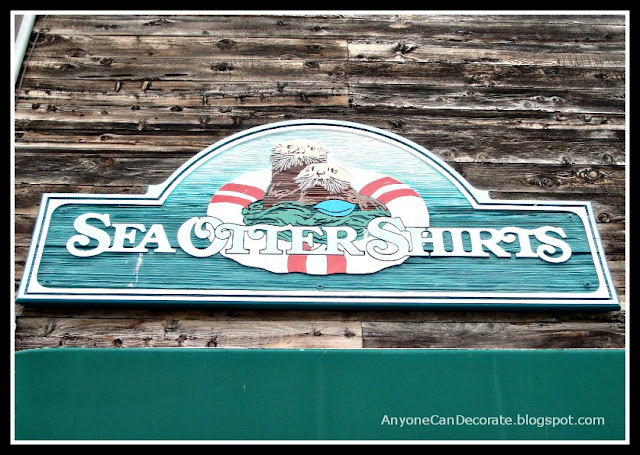 I don't ususally get into pictures, as I am the one taking them.  But my hubby got me to get into a few.  So you will rarely ever see me, but here I am, on vacation, hair up, visor on, dorky sweater tied around the middle... and of all things, enjoying an ice cream.  But hey, it was vacation :) 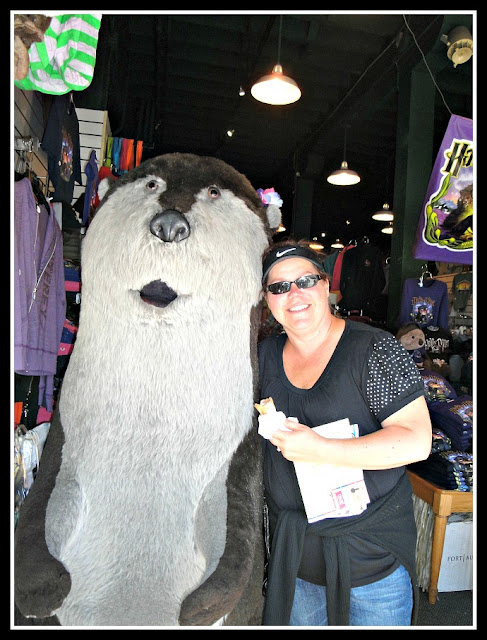 There was a stunning bay view from outside one of the restaurants on Cannery Row.  The water was so clear that you could see straight through it to the rocks and sea-life below. 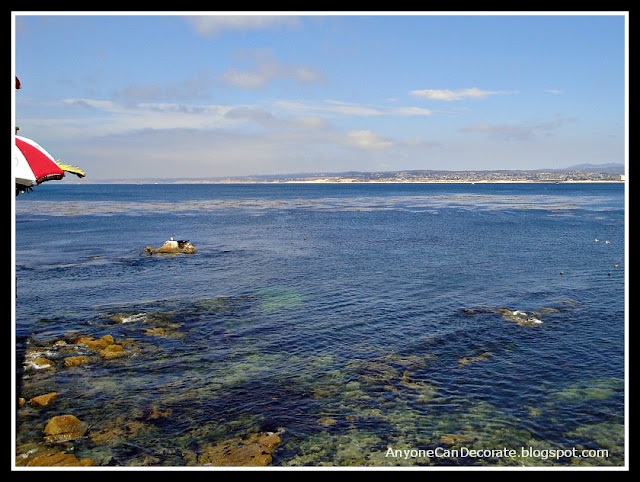 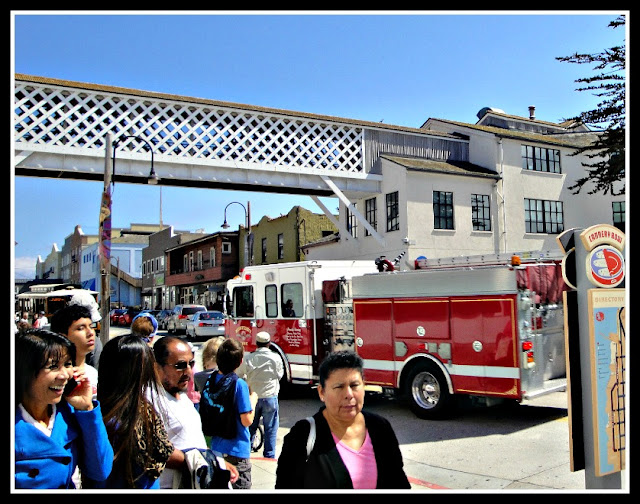 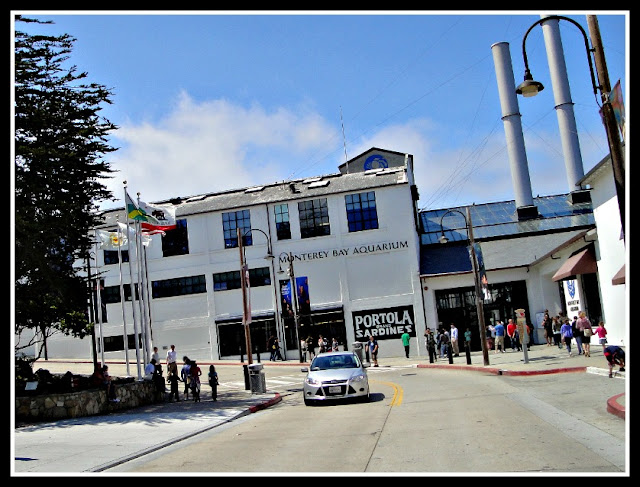 I'm fascinated by sea life and have never been to an aquarium before.  We had heard that the Monterey Bay Aquarium was one of the best so we decided to go inside. 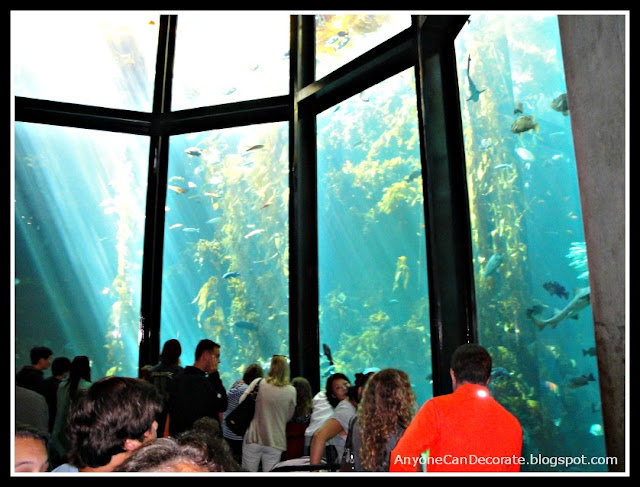 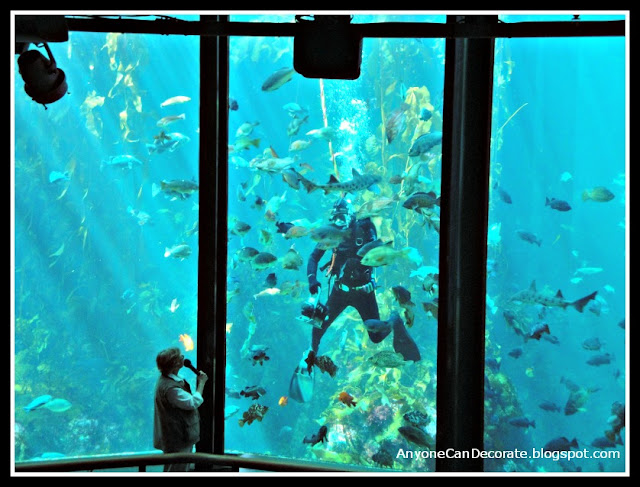 We saw several amazing sea creatures.  Some I could have never imagined.  Check out this next one... It looks like a plant but is actually some kind of seahorse. 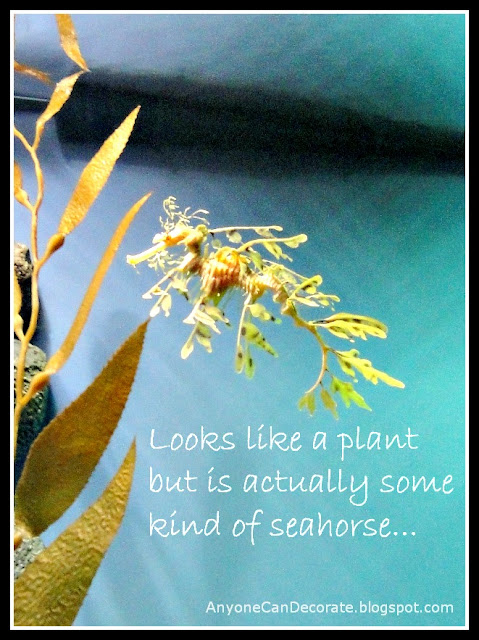 I had heard from several people that the jellyfish exhibit was amazing.  I'm not sure I would have every wanted to see a jellyfish exhibit, but after seeing it, I can admit it was one of the prettiest things I've ever seen.  I was surprised how many kinds there are.  As long as there is a very thick piece of plexiglass between me and the jellyfish, they are absolutely amazing!  However, I wouldn't want to encounter them in the ocean!!!  Yikes :) 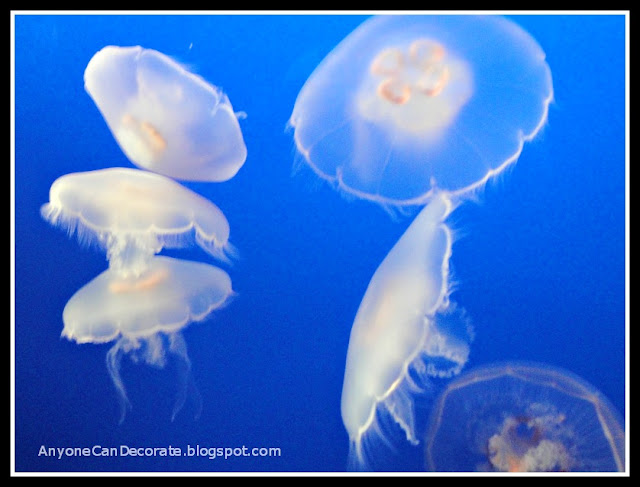 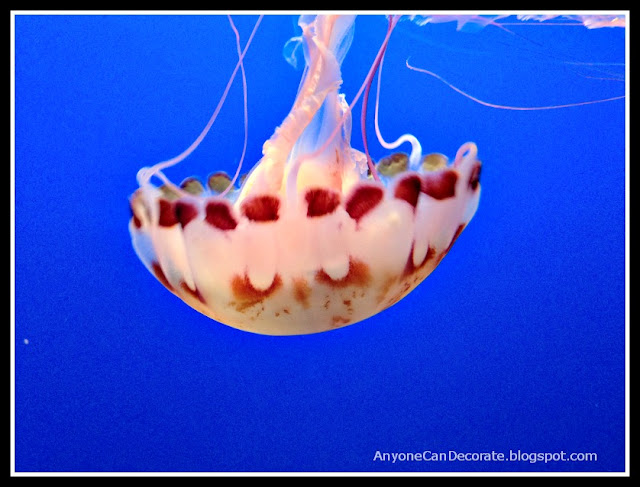 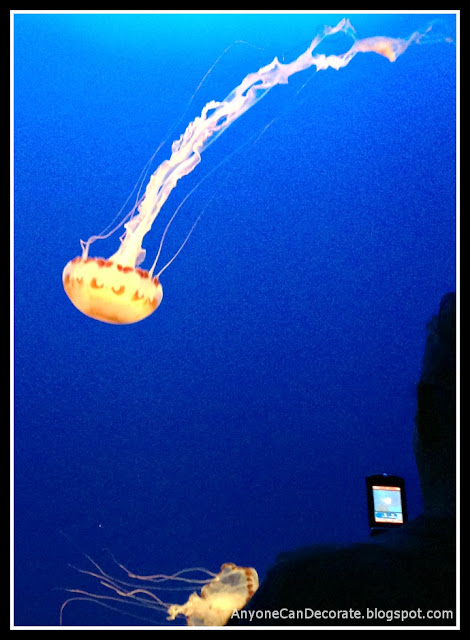 Some of the jellyfish looked like alien space ships with lights on. 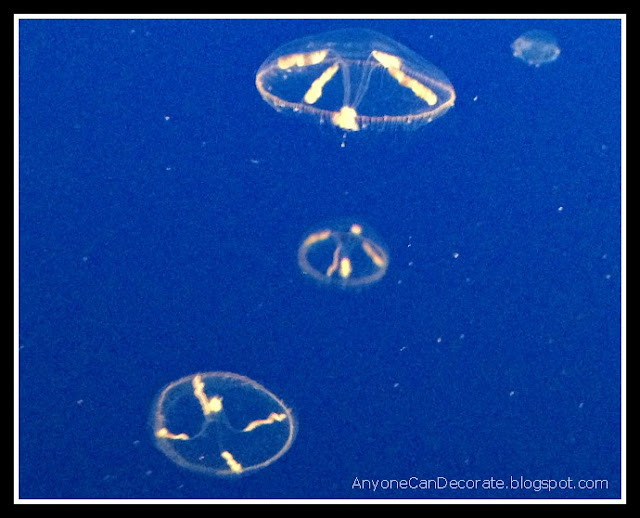 Then we saw these polka dot jellyfish.  God's beautiful decorations... So much design in each and every little detail, even on jellyfish... Simply amazing! 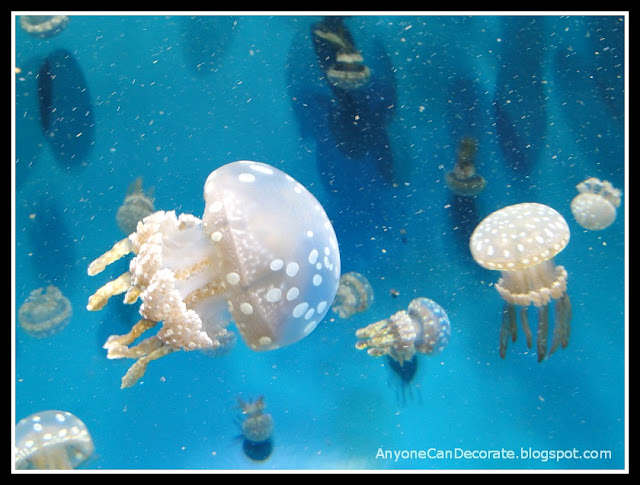 These pictures are just a sampling of all that we saw at the aquarium. If you ever get a chance to go to Monterey, I do recommend visiting the aquarium.  I grew up near the ocean and have been to Sea World many times... but at the aquarium we got to see so many things we had never seen before.  It was a wonderful experience! As was our entire day in Monterey...